Do you know The Cut’s column, I Think About This a Lot? It’s pretty fun, I enjoy it. They describe it below the byline as “a series dedicated to private memes: images, videos, and other random trivia we are doomed to play forever on loop in our minds.” I’m telling you, good stuff. Now I am bad at memes, having been a thirty-something-year-old in the body of a ten-year-old and exponentially aging up. I just don’t understand what makes a meme a meme. What are the confines of a meme? How is that video a meme? I yearn for the simpler days of lolcats and classic, easily identifiable memes like “One does not simply…” from Lord of the Rings. See? I have the urge to contextualize the joke. I was NOT MADE FOR THIS.

I spent much of my life being the sort of person who was not included in inside jokes and as a result I despised them. Perhaps this is why I always (unnecessarily) explain humor.

My husband Will always accuses me of killing jokes. He’s very thorough. He gets this odd, wobbly smile on his face and talks with illustrating gestures. “You’re like…Lenny, from Of Mice and Men,” he says, and I start squirming. “You, like…pet the puppy, but you love it so much you’re crushing it slowly.” He ruffles my hair, beaming with love and slight pity. “Best of intentions.” This is one comparison.

Another, more gleefully, is, “You’re the Jack the Ripper of jokes!” We both think Jack the Ripper was actually a woman, probably the wife of a surgeon, with access to medical tools. So he’s suggesting that I’ve stalked these jokes in the dead of night and disemboweled them, systematically ripping out their uteri. I’m not funny, in and of myself, but I do things that other people find funny. Perhaps I am driven mad by hysterical jealousy; suppose I am obsessed with a wild and vengeful urge to lay bare and exposed the jokes’ funniness. Lenny, holding up the dead puppy, going, “This is how it works!” and George, with Will’s face, responding, “The puppy worked just fine with all its bones not smashed.”

A third, less creative, paints me as some merciless monster with blood dripping down my face from the spine I have just ripped out of a helpless joke, undoubtedly with my teeth–possibly still in my teeth.

I JUST WANT EVERYONE TO FEEL INCLUDED. For example, in fifth grade, I did not know that “cut the cheese” indicated farting. Don’t look at me like that. Yes, I am homely and pathetic, and I lived under a rock. During a science experiment that literally involved a piece of cheese being cut and squished (I have no idea what we were doing, and if anyone I went to elementary school with does recall, please drop me a line), I, attempting to be helpful, worked on the cheese squishing portion of the procedure. Minutes later, someone on my team asked, “Who cut the cheese?” (you can see where this is going). I was a very small, awkward, gawky-looking ten-year-old, with an unfortunate haircut and giant glasses. I often wore corduroy pants, and turtlenecks, and this particular, bright blue quilted windbreaker that I really liked. My instinctive dress code was frumpy-business-casual from birth. I obligingly said, “Me. I did it.” Hysterical laughter ensued over the Silent But Deadly fart someone else had emitted, which I had not yet even noticed, wafting through the air. I am no longer ashamed of farting and will happily admit when I am now the culprit, but I assure you, on this particular occasion, I was not at fault. No one liked me and I hated to give them genuine fodder to support that, so I was doubly upset and probably sulked for the entire rest of the lesson. Excluded. Shamed. Perpetually lonely. I think this is My Root as to why I rip the spines out of innocent jokes. See. I can reference pop culture. That was spiteful. I’m sorry.

When I was in grad school, twenty-five years old in actuality (so about fifty-something, in mannerisms), Will was working for a web platform as a content writer. As a fifty-something-year-old curmudgeon illiterate in the mysterious ways of the internet, I barely know what that means. One day he came home and told me he had pitched a YouTube series that would be called, “Unfunny Girlfriend Tells Jokes,” which would just be me, earnestly telling him jokes, preferably famous ones like, “How do you know that an elephant has been in your fridge?” The correct answer, apparently, is, “Footprints in the butter.”

BUT, in this wildly successful YouTube series, I would say something like, “And it’s funny because obviously an elephant would never fit in your fridge. A baby, maybe, if you had a very large fridge, but you’d know if one was there, because it would probably break the shelf. Can you imagine how small an elephant would have to be, to leave footprints in your butter? Hilarious!”

His boss loved it, but fortunately the pilot never aired and my dignity was preserved, left to be destroyed on my own terms.

For the purposes of this essay, I googled, “what is a meme?” because, as previously established, I am a person whose internal age does not match her literal one, one who apparently googles questions sometimes when sick in bed on Monday nights. And occasionally at other times. The reliable-enough bastion of verbosity, Dictionary.com, was there for me. I have humbly copied and condensed the results to:

This is good. This is helpful. I can work within these parameters. There are still problems, of course, such as what other people find funny—which I find utterly mystifying—and what constitutes “slight variations,” but I can work with this. Let’s try.

One meme I do love is, “Clean all the things!” from Allie Brosh’s phenomenal web comic, Hyperbole and a Half. Again, easily identifiable. It’s probably the most well-known meme from the comic (am I doing this right? This talking about memes?), and my second-favorite from Brosh’s work.

Earlier this evening I was googling “the cut I think about this,” because I find it amusing and I was looking for inspiration. And maybe an email to submit to, if I found inspiration and thus something to write about that I think about a lot. And again, my googling habits are shameful.

A fourth: I’ve found inspiration. I have a topic for I Think About This a Lot. It’s the alot.

The alot is my favorite creation of Allie Brosh’s. Can I call it a meme? It’s a gentle-hearted creature apparently gifted at swimming that looks kind of like the love child of a woolly mammoth and…something else, to me, although Brosh lovingly describes it as looking “like a cross between a bear, a yak and a pug.”

To which I say, “Sure,” and also, “Where’s your Oxford comma, ma’am?” I’m twenty-six now, but last year was tough, so I’m inwardly a ripe old eighty-five, and feisty.

But the alot is a wonderful, practical creature. It has many skills and at least two important purposes. It gives the neurotic grammarian something nice to envision when assaulted by egregious typos or careless errors, and it teaches students how to never make those egregious typos or careless errors again. I mean look at it. It’s adorable! Would you forget a face like that? 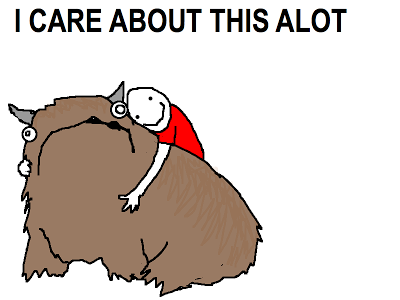 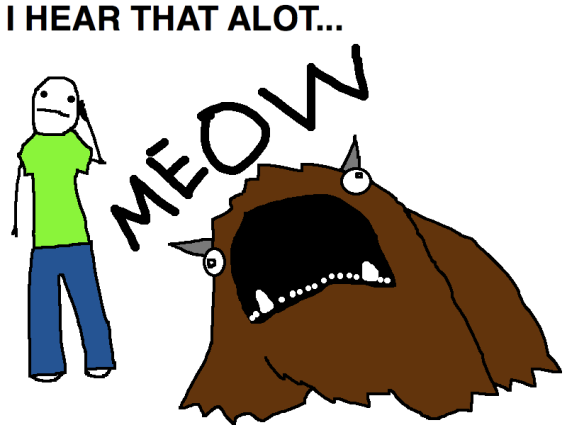 I think about the alot a lot. Absently, when I’m on the subway; triumphantly, when I encounter it in print. One of my greatest failures as a fifth grade teacher was that I did not plaster the wall above my desk with pictures of it. My students, many of them reluctant writers but technological savants, far more gifted at the art of interpreting memes than myself, might have liked it! Maybe emboldened by their understanding of our inside joke, they would have confidently written about frequency, or multiples, in their creative writing projects, looking to these variations on a humorous image, shared frequently online, and now posted above their young and hip teacher’s desk for confirmation.